Dreadbag.de has some Eco / bio impregnations tested and we came to the conclusion that the IMPREGNO impregnation is the best for the dreadbag, the people and the environment. The PFC-free impregnation can therefore be applied to your dreadbag without hesitation. Please note the application anyway. We also recommend buying 1 liter directly, because then the price / performance ratio is even better. € 18,95 / per liter - experience shows that you can usually get by with this for 2-3 years. 😉

Very easily: Your dreadlocks stay dry under the dreadbag in the rain! We tested it and were out in the rain for 8 hours and the dreadlocks were completely dry. Never again wet dreadlocks with this PFC-free eco / bio impregnation. The next rain shower can come.

General information about the product IMPREGNO:

To achieve an optimal care effect, the material must be cleaned. Shake IMPREGNO well before use. Do not use on glass surfaces.

IMPREGNO has high abrasion resistance and breathability is retained.
IMPREGNO is highly water-repellent, dirt-repellent and UV-resistant.

Spray process:
Spray IMPREGNO evenly from a distance of approx. 25 cm until the surface is evenly wetted. Please let it dry completely.

Sponge process:
Apply IMPREGNO evenly to the object. Then let it dry completely.

Notes on consumption:
1 liter of IMPREGNO textile enables the impregnation of approx. 15m².

You get IMPREGNO ready for use, easy to use and lastingly effective for almost all materials and surfaces.

IMPREGNO - PFC-free impregnation - for the sake of the environment.

IMPREGNO is a fluorine-free waterproofing agent for long-term impregnation for application to textiles, especially for outdoor articles, stone, wood, leather or plastic.
IMPREGNO is suitable for all absorbent materials.
The grip of the material is preserved.
IMPREGNO is ready for use and can be applied by spraying, in the washing machine for re-impregnation or in a foulard (textile machine). The goods to be equipped must be free of effect-reducing substances (e.g. residual alkali, dust, preparations, etc.).
IMPREGNO is low-odor, non-flammable and not self-igniting.
IMPREGNO has a preventive effect against fungus and algae.
IMPREGNO is Made in Germany.

Why PFC-free is good for people and nature.

PFC are poorly degradable compounds made of fluorine and hydrocarbon. They even appear in the liver of Arctic polar bears because the substances accumulate through the food chain. PFC are not harmless for humans: recent studies suspect a connection between PFC and the increased growth of tumors, reduced fertility, immune disorders, thyroid disorders and obesity.
PFC is an abbreviation for per- and polyfluorinated chemicals. This group of substances comprises more than 800 substances.
The best known representatives are perfluorooctane sulfonic acid (PFOS) and perfluorooctanoic acid (PFOA).

PFCs do not occur naturally, but have an anthropogenic origin. Chemically speaking, PFCs consist of carbon chains of various lengths, in which the hydrogen atoms are completely (perfluorinated) or partially (polyfluorinated) replaced by fluorine atoms. Polyfluorinated chemicals can be broken down into perfluorinated substances and are therefore widely referred to as precursors.

The use of two extremely durable PFC's (PFOS and PFOA) is restricted in the EU as well as in Switzerland. However, other PFCs, which also pose health and environmental risks, are still in use. It is scary that PFCs have even been found in the blood of newborns.

How do PFCs get into the environment?

PFCs can be released into the environment during their manufacture and in the manufacture of products containing PFC. When using and disposing of these products, PFCs can also be released later in the life cycle.

Neither biotic processes (bacteria) nor abiotic processes (water, air, light) can contribute to the breakdown of the PFC. This means that they cannot be dismantled in sewage treatment plants. Rather, additional perfluorinated chemicals are created in sewage treatment plants through various conversion processes from the degradable precursor compounds (polyfluorinated chemicals). Water-soluble PFCs are distributed globally across rivers and seas. These compounds are even found in remote areas such as the Arctic and the animals living there.

Other PFCs accumulate in the sewage sludge. If this sewage sludge is used as a soil improver in agriculture, plants can absorb the PFC from the contaminated soil or the chemicals can seep into the groundwater.

Volatile PFCs, for example impregnation sprays, are distributed into the atmosphere via air currents. PFCs can also adsorb on particles and thus be transported over long distances in the air. Precipitation events in turn get PFC into soil and surface water.

Why are PFC so worrying for the environment?

PFC consist of carbon chains of various lengths, in which the hydrogen atoms are completely (perfluorinated) or partially (polyfluorinated) replaced by fluorine atoms. This very stable bond between carbon and fluorine can only be released with very high energy consumption.
Once PFCs are released into the environment, they remain there for a very long time. Some PFCs, especially PFCs with a long carbon chain, also accumulate in the organism and along the food chain. PFCs with a short carbon chain accumulate less in the organism, but are all the more mobile and can therefore contaminate groundwater and drinking water faster. Some PFCs are also known to be toxic.

Are PFCs dangerous to humans?

PFCs are mainly ingested through food or contaminated drinking water. Increased concentrations of PFC in indoor air, for example through carpets treated with PFC, also contribute to PFC levels in the blood. In humans, PFCs such as PFOS bind to proteins in the blood, liver and kidney. The transmission of PFC from mother to child during pregnancy and lactation and the slow elimination of long-chain PFC from the human body are particularly critical. 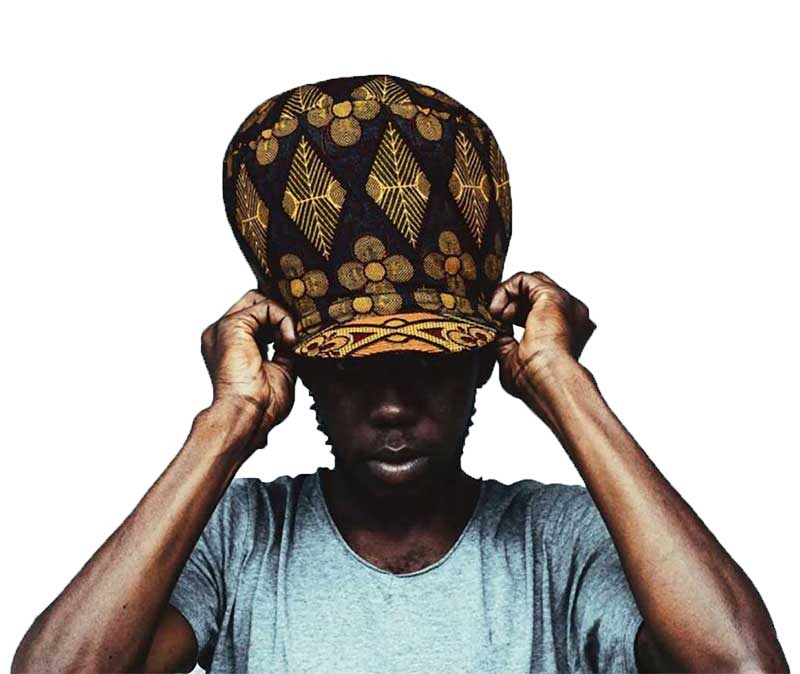 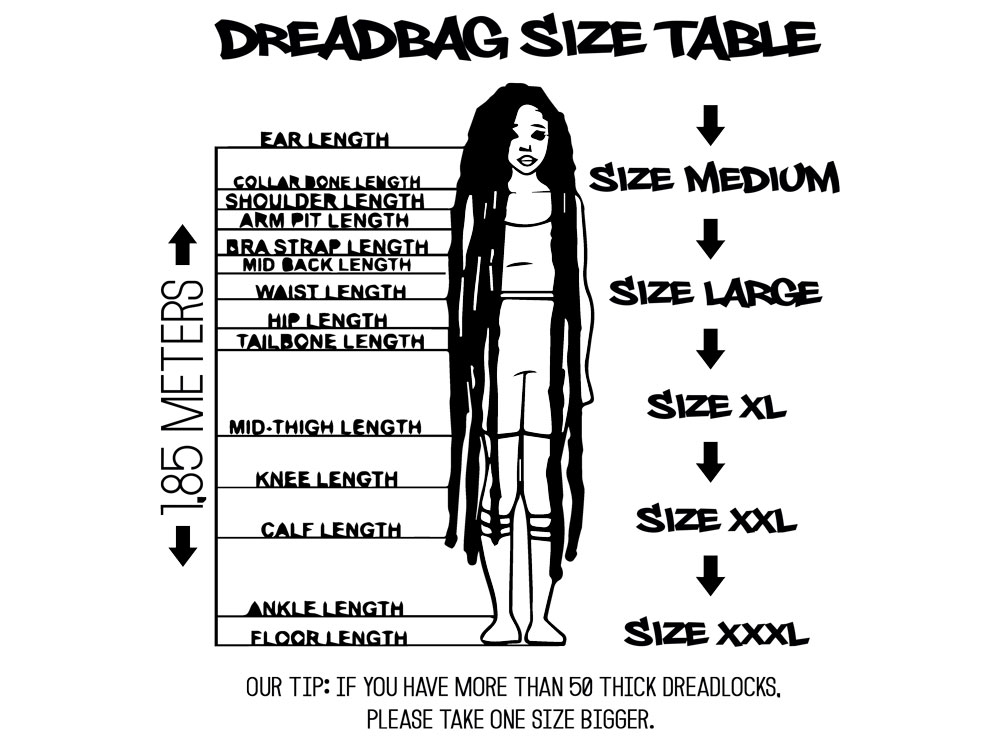 You can pay with us by bank transfer, instant transfer, Giropay, PayPal & credit card. After receipt of the payment, we will send the ordered dreadbag (s) within 2-3 working days. Note: Each order will be canceled without payment after 7 days. So if you pay with prepayment, please transfer within 2-3 days, so you can get your Dreadbag also delivered.

Optically as well as qualitatively, the Dreadbag offers you the optimum of quality and style at a small price. And so you can wear your new Dreadmütze without any worries, we have ensured that the Dreadbags are manufactured under fair conditions in Europe. All materials used are color, washable and sun-resistant. We also guarantee that the Dreadbags have retained their shape even after one year.

All dreadbags made of thick cotton (canvas) are suitable for impregnation. After the impregnation, the Dreadbag is waterproof in rainy weather (winter) and all dreadlocks remain dry in wind and weather. More info: "What and how do I best impregnate my dreadbag"

Presentation - Monitor and Graphics Card - Color is not just color

Please remember that the original colors of our Dreadbags can be slightly different from the colors you see on our website.

What is our claim to our dreadbag?

This is a question we asked very early, even before Dreadbag was launched. First, of course, it's about one Headgear for dreadlocks, First and foremost, it should be comfortable, stylish and practical and of course protect dreads from dirt and rain. But that's not all, also the Dreadbag should allow us during sports and at work to be able to move comfortably and freely with our dreads.

All these points are well managed by good quality of workmanship, careful selection of materials and style-conscious design.

But is not there more?

It soon became clear that the importance of dreadlocks also plays a big role in the selection of headgear. People carry Dreadlocks for a variety of reasons. But for most people, their dreads are also an expression of their inner values. This is often about spirituality, dignity, closeness to nature & criticism of capitalism.

The question which is naturally asked is: If you want to cover your dreadlocks with a cap, which is produced from chemical fibers under human-despising conditions, then flown around half the globe, then sold by a company that is only interested in profit optimization and financed by banks until it finally yields profit?

Dreadlocks Hats - Rasta Caps - Rastafarian Crowns to produce fair is possible! You just have to do it! Royalty - Dignity - Livity - A “different” better world is possible!

This website uses cookies to improve your experience while you navigate through the website. Of these, the cookies that are categorized as necessary are stored on your browser as they are essential for the functioning of the basic functions of the website. We also use third-party cookies to help us analyze and understand how you use this website. These cookies are only saved in your browser with your consent. You also have the option of rejecting these cookies. However, refusing some of these cookies may affect your browsing experience.
Necessary always active
Necessary cookies are absolutely essential for the website to function properly. This category only includes cookies that guarantee the basic functionality and security features of the website. These cookies do not store any personal information.
Not necessary
Unnecessary cookies are all cookies that are not particularly necessary for the website to function and are used specifically to collect user personal data via analyzes, ads or other embedded content. It is mandatory to obtain the user's consent before running these cookies on your website.
Functional
Functional cookies help to perform certain functionalities like sharing the content of the website on social media platforms, collect feedback, and other third-party features.
Analytics
Analytical cookies are used to understand how visitors interact with the website. These cookies help provide information on metrics on the number of visitors, bounce rate, traffic source, etc.
advertisement
Advertisement cookies are used to provide visitors with relevant ads and marketing campaigns. These cookies track visitors across websites and collect information to provide customized ads.
Others
Other uncategorized cookies are those that are being analyzed and have not been classified into a category as yet.
performance
SAVE & ACCEPT
Need Help? Chat with us
Need help? chat with us
Greetings! Click Dreadbag Service Below to chat on WhatsApp
The Dreadbag Service typically replies in a few minutes. Monday - Friday: 11 a.m. - 00 p.m. - Europe / Berlin - UTC + 18
Please accept our Privacy policy first to start a conversation.
Dreadbag Service
Dreadbag Service - WhatsApp